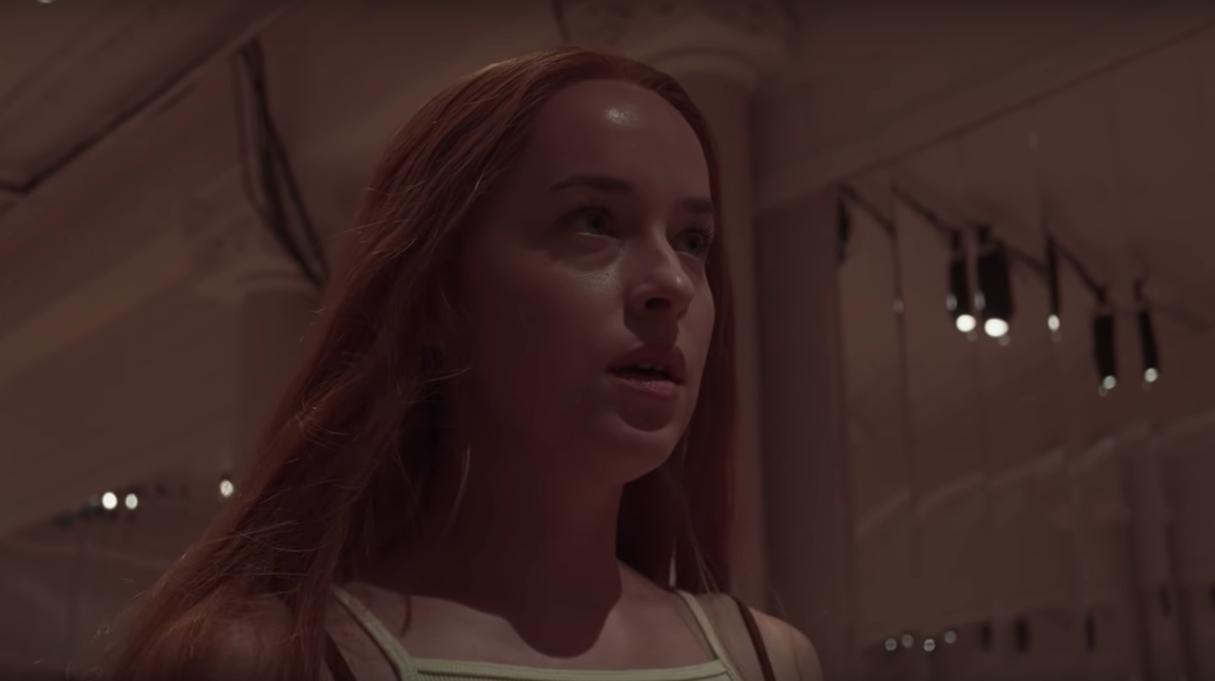 I will preface this review by saying that this film is going to be disliked by many. In fact, many moments will probably be unwatchable for many people. I am aware that it is not for everyone. However, Luca Guadagnino has created one of the best horror stories I have seen from not only this past year but all of the 2000s. Please note that I have not seen the original Suspiria from 1977 by Dario Argento, but, from what I have read, the films are extraordinarily different, and I must necessarily abstain from making comparisons.

The plot centers around the mysterious Tanz Dance Company in 1977 Berlin right in the midst of the German Autumn. From the first scene, you are met with a building sense of unease as a frantic young dancer Patricia Hingle (Chloe Grace-Moretz) visits an elderly male psychiatrist, Dr. Klemperer (I will leave the actor for this role as a surprise), in an attempt to convince him of a dark conspiracy at play within the company. However, she vanishes soon after. The spastic editing in the opening scene immediately puts you at unease and prepares you to be discomforted later. Thankfully, this film is above cheap jump-scares and is dedicated to building a sinister atmosphere and delivering actually frightening and disturbing content. Susie Bannion (Dakota Johnson) arrives in Berlin from a humble American upbringing with no formal training to audition for the company. Not only does she succeed in being accepted into the company, but she draws special attention from the choreographer and artistic director, Madame Blanc (Tilda Swinton). It is clear that Susie deeply reveres Madame Blanc and was drawn to the company for a reason. In addition to Blanc, there are several other matrons within the company’s administration who lurk about the imposing old German building that houses the studios and all of the dancers on the upper floors; what lies beneath…well you eventually find out. Soon, it is revealed that all these women are a part of some recondite cult of witchcraft (this fact is very forthright and not a part of the film’s mystery) and that the supernatural is very much in play. Though these witches have powers, they are still strongly presented as humans with uncertainties. They have extended discussions and take votes about the best course of action. By making the practitioners of evil seem conflicted and not omnipotent, the film grows more unnerving since what will happen becomes less obvious though the audience is still afraid of the power and secrets the witches possess.

The litheness typically associated with ballet is far removed from this film’s dancing; instead, the dancing appears rough, burdensome, and almost beastly. During the first dance sequence in which Dakota Johnson auditions, her body movements are matched with genuinely uncomfortable sound design so that the audience immediately knows something is up. The dancing is clearly emblematic of some hidden evil. In one of the film’s most brilliant scenes, a dance which, unbeknownst to the dancers, is coupled to a darker occult ritual seems to become maniacally involuntary, and the intense choreography and intelligent editing choices keep you on the edge of your seat. The on-screen choreography is brilliant and the coordination between all the moving parts of the filmmaking is astounding. The camerawork appears as a sort of controlled chaos though it is all extremely deliberate. Though there are specific dream sequences, the entirety of the experience feels surreal and dream-like, a sort of dark twisted fairytale. On top of all these features is an eerie score by Radiohead’s Thom Yorke. All of the performances are memorable and well-acted. Dakota Johnson can actually act and is captivating in her line deliveries as well as her physical performance. Tilda Swinton is brilliant as always in her multi-faceted supporting role (actually read the end credits to see why). Mia Goth also delivers an adept portrayal of Susie’s friend and fellow dancer Sarah that is pivotal to the plot. Guadagnino is a master of his craft, and the cinematography and direction are essentially flawless.

This is a complex film with a multilayered story that will probably require multiple viewings to fully comprehend. Even still, I will keep my description at a high level. On top, there is a surface narrative which is readily apparent scene by scene as Susie enters the company and gradually gets wrapped up further and further into the supernatural. Underneath, there is a hidden narrative that you have to piece together via interpretation of visually-embedded clues and hints within dialogue throughout the entire film; additionally, the burden is on the viewer to pick up on much of the evidence and correctly develop this hidden narrative. These two narratives are interwoven and eventually meet at the climax of the film. If you are not skilled at inferring information from subtle clues, you will probably leave the theater extremely confused on your first watch. Finally, there is a socio-political narrative at work having to do with the historical backdrop of Cold War-era Germany. The presence of such a narrative is confirmed as the ending fleshes out these ideas further without being abundantly forthcoming on the specifics of said message. Once again it is up to the viewer to interpret, and the exact interpretation could vary person to person.

While most movies feel like light snacks, this one is a three-course meal and a particularly hard-to-digest one at that. There is an extremely visceral death scene that will stick with you for awhile. The chosen camera angles, prosthetics, sound design, and editing make it overtly poignant and you can only sit and watch in discomfort as you wait for it to end. This is one of only a handful of movies with death scenes that have genuinely left me unsettled. Once again, if you are squeamish, avoid this film.

I do have a few grievances which I must air but they are primarily minor. I understand the intentionally jarring editing, and I enjoyed it when it was attempting to rapidly disorient the audience and perpetuate a dream-like atmosphere. However, at some points it became downright confusing to tell what was happening to the point that I believe it was detrimental to the visual presentation. Towards the end there are a few instances of astoundingly poor CG. Finally, I have a few issues with the ending that would need to be in SPOILER tags for me to fully elaborate, but it essentially boils down to me believing that some elements of the ending were messier than they needed to be.

The level of filmmaking dexterity shown throughout the movie alternates between really well-done and jaw-dropping. This film showed me things I had not seen before, and it was a particularly engrossing experience. I believe Suspiria will become a horror classic down the line, and you will be engaged on many different levels if you choose to watch. Just know what you are getting into.