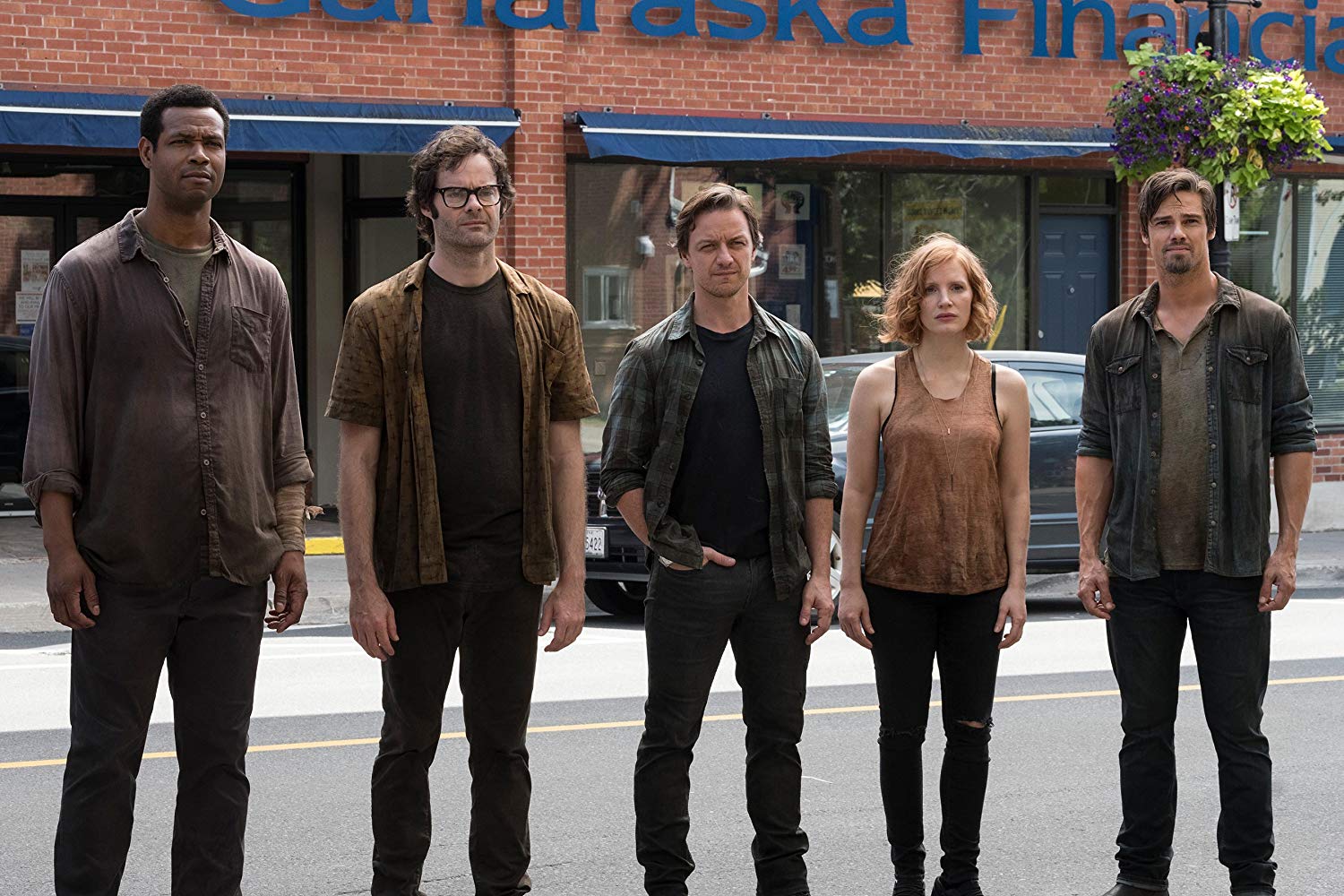 After a two-year break from 2017’s It: Chapter One to grow up 27 years, the Loser’s Club — Bill, Ben, Beverly, Richie, Eddie, Stanley, and Mike now played by James McAvoy, Jay Ryan, Jessica Chastain, Bill Hader, James Ransome, Andy Bean, and Isiah Mustafa, respectively — is back in action to defeat Pennywise the Clown during its next epoch of surreal menace. I will not waste too much time with the plot synopsis as it is simply an adult version of the last movie. When the Pennywise threat resurfaces, Mike, who still lives in Derry, gets in touch with each of the members of the gang who are all in different locations and have different professions so that they can reunite and defeat It once and for all…using a random Native American ritual that has never been successfully pulled off before.

I enjoyed Chapter One for the most part as it is an above average monster horror flick that is elevated further by its fleshed-out characters and intriguing interpersonal issues. Though the movie had an abundance of jump scares (a perennial front runner in my list of pet peeves in cinema) and moments of silliness, the movie still manages to construct an atmosphere of creepiness and menace due in large part to Bill Skarsgård’s performance as Pennywise and allowing the audience to understand the weaknesses and struggles of the pubescent protagonists. The film hits its high points when it delves into those struggles and the overarching fear Pennywise is able to generate by personally exploiting each protagonist’s weakness; the film starts to falter once the computer-generated conglomeration of horrific craziness takes center stage. Unfortunately, Chapter Two gave me significantly more of the latter, and it gets real stupid real quick.

This movie is way too long. Just shy of 3 hours, the runtime is filled to the brim with…well…just stuff. I understand that the source material is a 1,100 page Stephen King novel, and I fully admit that I have not read it and that a number of story decisions can probably be explained by the source material, but I’m reviewing this product as a film. A movie’s length is never in and of itself an issue; it becomes one when the characters are not interesting and the story is needlessly repetitive and drawn out. The plot feels poorly contrived, and essentially comes down to the club members each having to go find his or her special token and overcome fears and insecurities that Pennywise will embody and try to exploit. A slew of very similar sequences occur for each individual character and it grows stale very fast. It does not help that none of the adult versions of these characters are portrayed with much conviction despite the film having a skilled cast. This is an extraordinarily rare instance of child performances surpassing the adult performances; it might just be a consequence of an over-the-top murderous clown having a better dynamic with children. This movie is further plagued by the tone being all over the place from scene to scene and even within many scenes individually; significant shifts from horror to comedy are jarring and undercut the tension. Bill Hader’s Richie, a professional comedian who does not write his own material, provides a steady flow of humor mostly in the form of one liners into much of the film when it is completely unnecessary and counteracting the creepy atmosphere that had already been established. Additionally, nearly every CG monster design in this movie looks astoundingly silly, and, thus, I had a hard time taking many of the “scary” moments seriously. VFX aside, the direction is professional and above average for the genre; similarly, the visual presentation has notable flair and is varied throughout the movie which features several memorable shots. The movie is just way too focused on absurd imaginary monster madness rather than the characters, though the film does its best to pretend to care.

The parts of this movie that are effectively frightening are those where Pennywise is lurking in and luring from the shadows. Once again, Bill Skarsgård is exceptionally unsettling as Pennywise in his prototypical form. I appreciated that each of the adult characters feel as though they are the grown-up counterpart of their childhood versions, and I liked how their fears and insecurities from childhood transition into adulthood. However, each of their personal issues are just not all that intriguing this time around, and their arcs are largely forgettable; I believe this is a combination of none of the performances being particularly compelling and poor writing. Ultimately, I felt no emotional connection to any of these characters and was not interested in how each of the character’s stories would conclude. I understand it is difficult to adequately adapt this many book characters in just two movies, but the repetition and uninspiring character developments are what knock this film down from the standard its predecessor set. What is worse is that I think most of these issues could have been fixed by clever writing focusing more on taking the characters’ arcs in less formulaic directions rather than concentrating on the CG monster scares.

As I previously stated, this movie is crammed full of things, many of which I disliked, and I will list off several such elements here. Henry Bowers (now played by Teach Grant), the homicidal bully from the last movie, returns as a crazed escapee from a mental institution to further antagonize our protagonists, and every scene with him is more goofy than the last. I see no reason for this character to even exist in this movie’s plot, and I was annoyed every time he appeared on screen. Stephen King has one of the least subtle cameos I have ever seen which took me out of the story for a few minutes. There is a painfully obnoxious homage to John Carpenter’s The Thing that broke my immersion in an otherwise perilous moment of the action; it is generally not a prudent idea to reference a better movie in the genre as I will just start thinking about how that movie is far superior to the one I am currently viewing. Some head-scratching sound editing choices are made at certain points that I do not think I can explain as anything other than mistakes. I have plenty more gripes with this movie, but I will not bother to mention them as they are sufficiently minor.

It: Chapter Two is a huge letdown in quality from Chapter One. If you are dying to see this movie after really enjoying Chapter One, I will not tell you to not see Chapter Two, but I will let you know to keep your expectations in check. Who knows…maybe the book readers will be immensely satisfied by this visual manifestation of the novel. However, I cannot recommend It as a cohesive duology. If you do ever want to check out this story, I would highly recommend stopping after watching Chapter One.