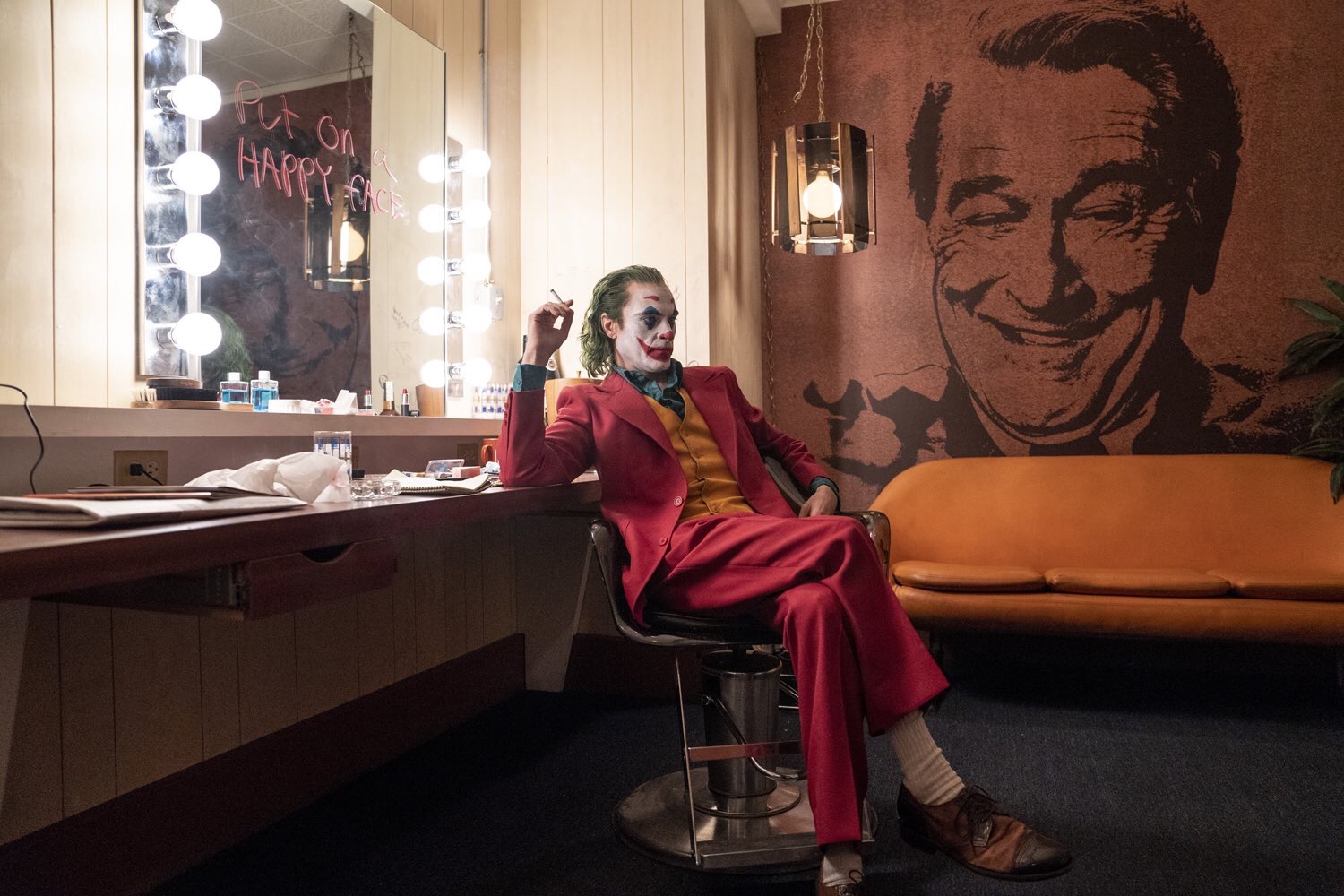 I fully expect Joker to be under intense scrutiny from audiences trying to evaluate how this version of the Joker stacks up to the numerous previous iconic portrayals of the legendary villain. This character is special in that it has given several skilled actors a chance to go all in on creating their own charismatic and memorable persona for better (e.g. Mark Hamill, Jack Nicholson, Heath Ledger) or worse (e.g. Jared Leto). Helmed by director Todd Phillips primarily known for his outrageous comedies, Joker presents the newest iteration of the famed Batman nemesis, exploring the character through an entirely different lens. While framing the story within the familiar context of DC’s Gotham City and relying heavily on the audience’s existing knowledge of the extrinsic characteristics of the Joker, this origin story takes an entirely new direction with how it deals with the Joker intrinsically.

Joaquin Phoenix, one of the most adept and versatile actors currently working in Hollywood, brings to life Arthur Fleck, a mentally-challenged bottom-of-the-barrel clown-for-hire in a socially and economically degrading Gotham City. Burdened by incessant negative thoughts and unfounded daydreams primarily centered around appearing as a comedian on a popular late night show hosted by Murray Franklin (Robert De Niro), Fleck seeks city-sponsored counseling, scrawls “jokes” and bizarre notions in a well-worn journal, and takes numerous medications to keep himself neurologically together. While taking care of his aging mother (Frances Conroy), Fleck struggles to work and socially function in a city that has rising crime and garbage piling up in the streets due to a union strike. While the poor and working class struggle to get by, billionaire Thomas Wayne (Brett Cullen) is doing better than ever as he vies to become mayor of Gotham City despite demonstrable criticism from those outside his tax bracket. From this set up, Fleck’s internal issues and the city’s internal issues are developed simultaneously.

Putting the plot aside for a moment, I need to mention how I was caught off guard by how well-crafted and striking the shot composition is throughout the film. Artistic combinations of both low-angle and high-angle shots, symmetrically framed spaces, slow motion, and intense closeups to capture the nuances in Phoenix’s facial performance are just a few of the visual highlights. The production design is commendable in that a dingy and dirty Gotham City is consistently captivating from scene to scene when the setting could easily be one of the more forgettable aspects of the film. Since the story takes place during the early 1980s, there is significant attention-to-detail in making all the subtleties of the props, costumes, and sets match the era, and it always feels as though you are in a grimy version of 1980s New York. Having seen many of his other directorial efforts where artistic visuals are an afterthought, I was impressed with the vision Phillips had for the screen. To top it off, the music choices are purposeful and appropriately contribute to the tone of many scenes.

While this version Joker character is competently written, Joaquin Phoenix’s performance elevates and the character’s on-screen presence into something unforgettable. Having lost what appears to be an unhealthy amount of weight and having nailed down the mannerisms and ticks of Fleck’s particular mental illness, Phoenix is able to pull off a beguiling performance that dominates the movie for the better. Thinking back, I am not sure if he is absent from a single scene. The precision with which he controls his facial expressions is masterful, and everything from his purposefully awkward line deliveries to his aloof dancing makes the character startlingly believable and unnerving. The maniacal cackling associated with the Joker is framed in a completely down-to-earth and sympathetic light as Fleck is physically burdened by a pathological laughing tick which Phoenix uncannily portrays. This movie is at its best when psychologically exploring Fleck as a human and how his family, upbringing, and circumstances all contribute to the state of his degrading mental health and growing misanthropy throughout the film. Though borderline over-the-top, the turning points he reaches are not reached hastily, and the changes he undergoes progress naturally and are understandable. At points, you want to sympathize with the character, but he will then do something that severely crosses the line, which challenges you to view Fleck as a nuanced and struggling human rather than a simple good or bad guy. Keeping all this in mind, I wanted a tight psychological focus on Fleck held throughout the film. Unfortunately, the plot gets bogged down focusing on other things.

Despite Phoenix elevating the material, I must discuss my issues with a number of aspects of the script. First and foremost, all of the ideas in this plot are fairly derivative, and there is a lack of incisive layering. The overarching character development clearly took inspiration from several early Martin Scorsese works, namely The King of Comedy and Taxi Driver, while sorely lacking the profound commentary on the human condition that those films give. While no aspect of the plot is notably poor, the pieces that fall into place to lead to Fleck’s sinister transformation are too conventional and detrimentally foreseeable. This movie attempts to have a shocking twist that is instead shockingly predictable; to make matters worse, once the twist occurs, it beats you over the head with flashbacks just to make sure you did not miss that there was in fact a twist. Next, when everything finally comes together and I was able to reflect on the character, I realized he just does not feel in any way like the traditional character of the Joker; the presented character is too unintelligent and emotional and entirely lacks dimensionality as an anarchist; however, the given characterization is perfectly acceptable as I appreciate the effort to humanize the character. Though this realization is in and of itself not a criticism of the film, I was completely taken out of the narrative every time Wayne or any other DC allusion gets awkwardly inserted on screen. The central character study is the most engrossing aspect of the film, and, thus, I strongly believe this movie would function better if it was completely divorced from the Batman universe so that I can leave my preconceived notions of the Joker behind. Finally, trying to place the Joker character into an economic class struggle within Gotham is an intriguing idea but pulled off so poorly to the point that I wish that this aspect of the story had been cut altogether. The movie ends up going the V for Vendetta route of an over-the-top masked protest against the oppressive government and upper class without being abundantly clear about what the exact issues are. I understand that the city is steeped in crime and filth and that there is significant income inequality, but there is nothing else besides us being told and shown this fact; while I rarely argue for this in movies, I think the fictional politics need to be fleshed out for this story to be less muddled. The Joker’s connection to the larger social struggle in Gotham that dominates the film’s final act is thin and seems to be misaligned with the nature of his mental struggles. The culmination of the entire subplot of civil unrest in Gotham feels contrived, as though it simply exists to be provocative and little else. As the plot demands, the degree of anarchy in the streets drastically accelerates in a comical fashion. Overall, this plot architecture is designed such that each act’s conclusion relies on being shocking rather than profound.

Apparently, this movie is heavily steeped in controversy at the moment, and I can understand how certain themes and provocative moments in it could be plucked out as evidence to back specific journalistic and political agendas. In my honest opinion, this movie as a whole is not nearly weighty enough or inflammatory enough to be very controversial. Putting that aside, if you can handle the darker facets of the film and want to see a fascinating downward psychological spiral and a masterful lead performance, you should definitely check this movie out, flaws and all, regardless of your interest in comic book lore. As for traditional comic book movie fans, Joker is a marked departure from the traditional comic book movie formula and will probably polarize most such film-goers. To be clear, Joker is not an action film and is barely even a comic book movie; it is a character drama. Just know what film you are going to see, and I believe you will get something positive out of it. As for how this Joker rates in relation to his predecessors, I would put this incarnation a rung below Hamill, Nicholson, and Ledger but still miles above whatever Jared Leto was doing in the Academy Award-winning film Suicide Squad.