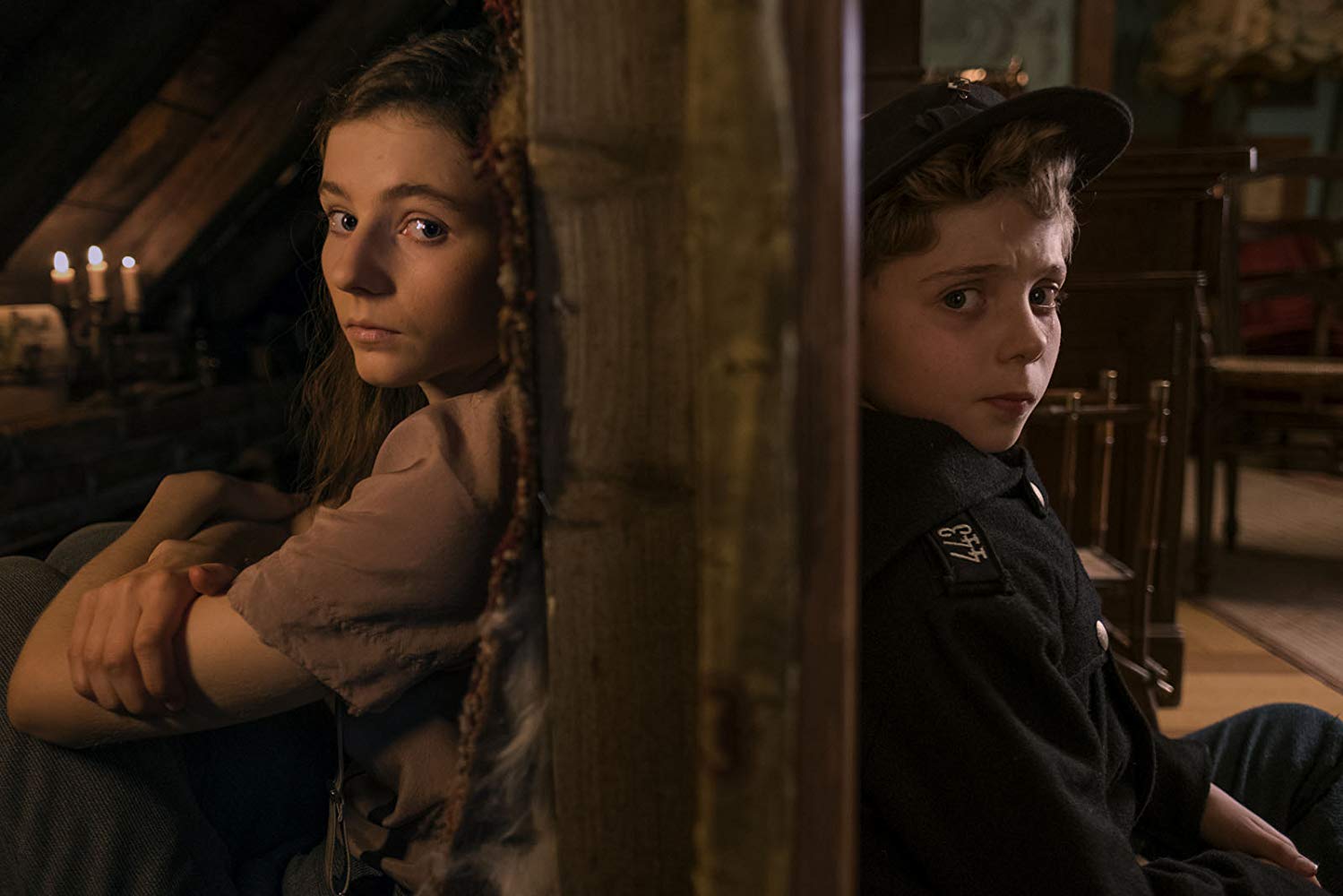 In the wake of the atrocities they committed under the regime of Adolf Hitler coming to light, Nazis became an extremely safe group to villify on screen after World War II. You would be hard pressed to think of a more iconic group to embody pure human evil. Thus, I can imagine it was startling for many to see marketing for a comedy where the protagonist is a member of the Hitler Youth and that has a goofy depiction of Hitler running around gleefully. Taika Waititi is a somebody now that he has directed (and acted in) a movie in the Marvel Cinematic Universe (Thor: Ragnarok), and his name being more well-known can only help gain attention for his more personal projects such as this one. Based on the Christine Leunens’ novel Caging Skies (2004), Jojo Rabbit, written and directed by Waititi, follows ten-year-old Johannes “Jojo” Betzler (Roman Griffin Davis) fully caught up in Nazi nationalism who just so happens to have a comically immature version of Hitler (played by Waititi himself) as his imaginary friend. Everythnig he thought he knew comes crashing down when he finds out that his mother Rosie (Scarlett Johansson) is stashing a Jewish girl named Elsa (Thomasin McKenzie) within the walls of their home. I had the chance to see this movie at the Virginia Film Festival, and the introductory speaker wanted to make it clear that the film is satire meant to tear down evil by poking fun at it…which is incredibly obvious if you watch the movie for even five minutes.

The relationship between Jojo and Elsa is the centerpiece of the movie, and it is both humorous and heartwarming as Jojo learns to overcome his propaganda-induced fear of Jews. Sadly, it is clear that Jojo has created this friend as a result of lacking a strong father figure and is drawn into the jingoism of the Hitler Youth in order to feel a part of something. Consequently, it is entertaining and endearing to watch him slowly unwind the propaganda and humorously come to terms with Jews not being dangerous monsters as he develops a friendship and crush on his Jewish house guest. The acting from the entire cast is competent but not mind-blowing. Taika Waititi is clearly having the most fun playing the ridiculous and childish Hitler phantasm and steals every scene in which he appears. The rest of the supporting cast is rounded out by Sam Rockwell, Alfie Allen, Rebel Wilson, and Stephen Merchant who all comically play variations of equally ludicrous Nazi caricatures.

Waititi infuses the entire presentation with such a whimsical energy that you cannot help but smile for the majority of the runtime. About 80% of the comedy works for me though it does start to veer into obnoxious territory on a few occasions. This light-hearted approach works well to satirize Nazism. This film received some backlash by people claiming it did not treat Nazism seriously enough and that the Waititi’s satire is ineffectual. I think we can all agree that satire is a powerful form of denouncing something, and that it is only effective when it is based on highlighting some bit of truth. The point of this movie is to highlight the silliness of the propaganda that governed the lives of those who bought into Nazism. By turning every Nazi character in the story into an outlandish caricature, Waititi is able to shed light on the underlying stupidity of the Nazi philosophy and order using the power of exaggeration. I will admit the film is not incredibly profound, but I do not think it has any responsibity to be. Even still, Waititi remembers to show the evils of the fascist regime before the film’s end. Unfortunately, the manner in which he does so is where I take issue with the tone and presentation. He constructs this fanciful world of Nazi Germany which is very clearly not meant to be taken too seriously but then shatters it to throw what he thinks is an emotional gut punch with stark, dramatic visuals. It all falls flat because the tone shifts so drastically; this moment is more confusing than heartbreaking. Soon afterwards, the film returns to its whimsical atmosphere. I was reminded of the film Life Is Beautiful (1998) which attempts to pull off a similar tone-shifting ending that really does not work for me because of how light-heartedly the film treats its subject matter prior to the conclusion. Despite the tonal issues, the movie is an all-around pleasant viewing experience.

Although Jojo Rabbit is far from a masterpiece, it is a fun romp that mostly succeeds in humorously breaking down a sensitive topic. I think most people will enjoy the humor and cute relationship between Jojo and Elsa. Thus, I would suggest you overlook any negative press and still check this one out. Despite mixed critical reception, it has been nominated for Best Picture for whatever that is worth (hint: it is not much). Besides, it is not every day you get to see Hitler…*SPOILER!*…get kicked out a window.