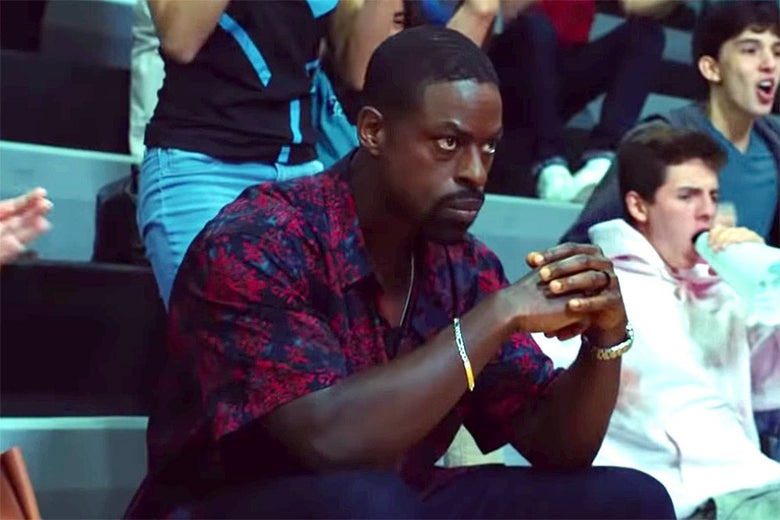 Trey Edwards Shults’ follow-up feature to the well-crafted but unfortuantely not well-received It Comes at Night (2017) flew under my radar until I took a look back at what I missed in 2019. The unfavorable audience reception to It Comes at Night was almost certainly due to A24’s misleading marketing which seemed to hint at it being a monster flick when in reality it was a slowly-paced yet thoughtful and suspenseful human drama. Once again, thoughtful and suspenseful human drama is the name of the game in Waves, and Shults excels at it.

The story revolves around a suburban family and is split into two halves zeroing in on a teenage brother and sister, respectively. Popular high school senior Tyler Williams (Kelvin Harrison Jr.) seems to have it all: popularity, a well-off family, a beautiful girlfriend, and considerable wrestling talent. He is pushed to be his best in life by his demanding father Ronald (Sterling K. Brown) and cared for by his stepmother Catherine (Renée Elise Goldsberry). Meanwhile, his younger sister Emily (Taylor Russell), who is also in high school, is the more thoughtful and reserved of the two siblings, and her relationships with her family and Tyler’s wrestling teammate Luke (Lucas Hedges) are an equally important pillar of the story. I do not really want to say much more about the specific of the plot other than that. The real-life issues that comprise the conflicts that arise in the story are believable within the context of the characters’ lives. Every character has convincing emotional responses to upsetting events due to superb performances from every member of the main cast as well as Shults’ precise vision and direction.

What sets this movie apart is how honestly it depicts the positives and negatives of strong human emotions. The film is unafraid to starkly show the possible dire consequences of unbridled anger and acting on your instincts while in a frantic and upset state of mind; at the same time, it boldy depicts how showing empathy and exercising forgiveness can profoundly touch and improve someone else’s life as well as positively enhancing your own life. Outside of the repeated use of oceanic imagery, I believe the film’s title is a reference to the fact that actions have rippling consequences; the film’s lighter and more contemplative second half strongly contrasts the heavy and grave first half in the way each main character for that segment of the story demonstrates his or her ability to recognize the possible far-reaching effects of his or her actions in the here-and-now. This project appears to be a personal manifestation from Shults’ own life, and it appears he took care in eliciting the best possible portrayals of the characters he wrote.

It is fascinating to watch the story unfold just by how the presentation style changes so markedly with the current main character’s state of mind at any point in time. The films rhythmically establishes itself and artfully introduces every member of the family in a memorable single-take sequence. From there, the story dynamically develops featuring no shortage of rotating shots, quick zooms, and other unconventional camerawork with a barrage of hip-hop music on top of everything. As the film crescendos up to its dark and panicked first-half climax, an aggressive cut from Kanye West plays over a rapidly-edited and dizzying succession of kinetic shots before quieting down to a brief moment of silence at which point the height of the aspect ratio subtly shrinks to further reinforce the intense pressure of the situation. This stress-inducing sequence is so mesmerizing because of how it completely engrosses you in the main character’s headspace. During the calmer second half, the film’s pace and style naturally adjust to the mood of the story. When aspect ratio changes happen, they feel meaningful and do not seem gimmicky because each one strikingly affects the atmosphere and perception of the current mood of the story; it communicates dramatic information that you would not otherwise get from the rest of the visual presentation. Despite the fact that Shults’ stylization of every aspect of the production elevates the filmmaking to the heights it does reach, there are certainly points where the stylistic excess becomes distracting; there are multiple points where I found myself wanting scenes to get a little more of a chance to breathe so that the focus and impact could be enhanced. That minor quibble aside, there is not much I can criticize about this film’s constitution.

Trey Edwared Shults is a director I will be keeping an eye on going forward, and I hope he continues to gain a following. He understands human beings so well, and he appears to have skill at presenting compelling stories within different genres. Almost everyone should be able to relate to some element of this movie as its gamut of emotions is wide and its themes are far-reaching. Waves does not shy away from serious subject matters, but that should not keep you from checking it out. I highly recommend it as one of the best films of 2019.