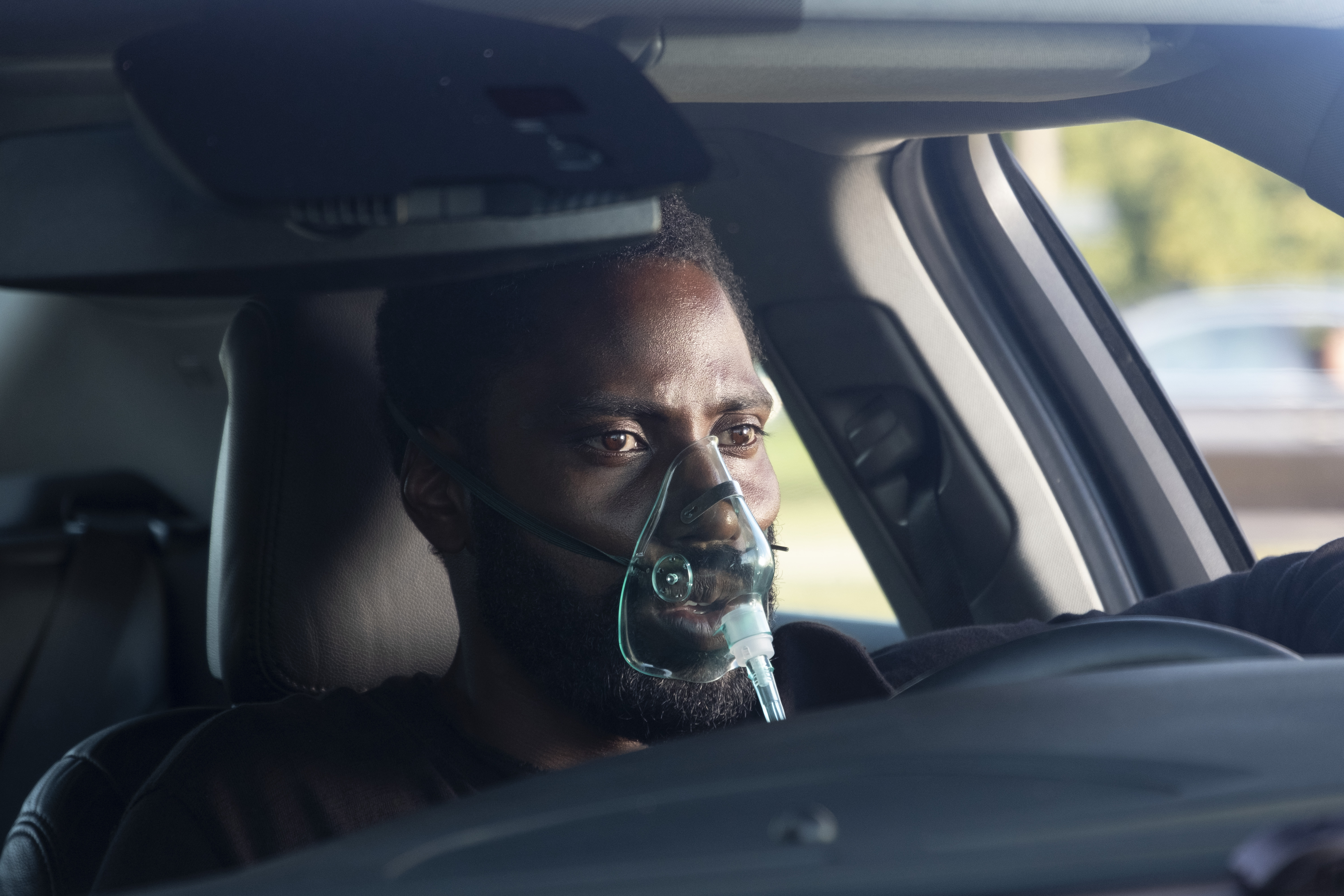 Yes, movies are back in the theaters. Christopher Nolan, the spectacularly imaginative, IMAX-camera-wielding director behind the box-office-smashing Dark Knight trilogy and outspoken champion of the big screen experience has deployed his latest 200-million-dollar abstruse thriller to get theater outings kicked off again with a bang (an extremely loud one if you see this in an IMAX theater…). Bring your brain in tip-top shape and be ready to stay hyper-attentive for all 150 minutes as the concept of time itself is always pliable with a Nolan-original story. Despite Nolan having previously constructed mind-boggling and time-twisting works such as Memento, Inception, and Interstellar, Tenet is without a doubt his most atypical film to date. As he continues to wage war against conventional movie chronology, will audiences be enthralled, disoriented, or both?

The film follows The Protagonist (John David Washington), an American CIA agent who, after a retrieval mission ends poorly, finds himself coopted by a secretive organization known as “Tenet” that “transcends national interests”. With the knowledge that humanity faces an existential threat, the Protagonist is introduced to the film’s central mechanistic monkey wrench: time inversion. He learns that at some unknown point in the future technology will be invented capable of inverting an object’s entropy (a measure of an object’s molecular disorder and one of the few physical quantities that necessitates a single direction for time) which then causes that object’s “arrow of time” to reverse as well; consequently, the object will then start “streaming” back into the past from its time of inversion. However, from the Protagonist’s “forward” and linear point of view, such inverted objects will appear to be moving in reverse as he moves the opposite direction in time. Not easily graspable, I know. He examines inverted bullets that have been discovered and traces their origins to affluent Russian arms dealer Andrei Sator (Kenneth Branagh) who appears to be at the center of time inversion operations towards nefarious ends. As he plans and investigates, The Protagonist meets and is assisted by fellow Tenet agent Neil (Robert Pattinson) who always seems to know a bit more than the Protagonist expects. To gain access to Sator himself, The Protagonist must also interface with Sator’s all but estranged wife Kat (Elizabeth Debicki). The dynamic between the Protagonist and these three major characters along with hefty but critical exposition is what drives the plot forward (and backward) as the timeline gets increasingly convoluted.

Per usual, Nolan and his creative team have produced another top-notch visually engrossing experience. The IMAX visuals are magnificent as expected with cinematographer Hoyt van Hoytema who collaborated with Nolan before on Dunkirk and Interstellar and who, to my knowledge, has never shot a film that did not look spectacular. The expansive IMAX format swallows the viewer whole making every wide shot and large structure imposing while a dusky color palette communicates the seriousness of the plot’s ramifications. Notably, impressive nautical shots abound as a seascape seems to always be nearby; one of the memorable “whoa” moments occurred for me when I first saw the waves breaking in reverse from an inverted character’s point of view while aboard a ship. The visual effects that layer the conflicting chronologies atop another are seamless and fascinating to follow. Artistically, the overall style is reminiscent of the most recent James Bond entries as The Protagonist maintains a high-class refinement and wardrobe standard as he traverses iconic global destinations following plot threads. These presentation choices are intelligently made as they lend an air of coolness to everything which at the very least will keep the audience superficially engaged even if the exact details of the plot might be obscure.

As much as Nolan attempts to overpower his audience with visual gravitas, he simultaneously goes full tilt with powerful sound design (i.e. LOUD). When I first saw Tenet in (fake) IMAX, the soundtrack and ambient noises particularly in the rear channels drowned out way too much crucial dialogue and bordered on comically obnoxious. However, when I saw a standard showing the second time around, the audio experience was vastly improved though still far from quiet. The next time I watch will almost assuredly be with subtitles and with fast-forward/rewind capabilities unless I can catch a 70mm (real) IMAX showing somewhere. As for other minor gripes, I still am unimpressed anytime Nolan depicts hand-to-hand combat in his action films, and although there is some lackluster and awkwardly edited fighting, one of the main fight sequences involving time inversion is quite well done (on par with the hotel fight scene in Inception) as it appears a significant amount of effort went into getting it optimally staged. If you are searching for an action and effects extravaganza, you will not be disappointed by Tenet.

All technical details aside, Tenet is held back by one major factor: the film has to function as a mainstream blockbuster. As always, Nolan packs the film full of content and, even with a 150-minute runtime, Tenet still feels as though it went through a substantial edit to reach that mark. Consequently, the film feels aggressively edited to the point that it has little to no breathing room for the ponderous concept that is baked into the story. As a whole, stringing together action set pieces appears to take priority over story-telling and elegant concept dissemination in many instances. Despite the audio obfuscation during my first viewing, I believe I would have been able to ascertain much more of the plot and conceptual details in a single watch with a less suffocating edit. However…

…I love this film. It engaged my mind unlike any other theatrical release I can remember for a long time. I haven’t rushed back to the theater to see a movie twice since I started this website. The outright breaking of physics and the contemplation of potential consequences is what magnetized me to Tenet and is what keeps me thinking about it even now. Theoretical Physicist Kip Thorne who advised Nolan on the significantly more precise physics of Interstellar was in the “Special Thanks” section of the credits and I imagine he took a look at the high-level science if not the script itself because just about every logical issue that can arise from the time-reversal mechanics is mentioned at some point followed by some hand-waving explanation or my personal favorite: “don’t try to understand it.” While in almost any other time travel movie I would call this excuse a lame cop-out as the lazier instances of this type of film usually layout specific time travel rules (usually requiring a multiverse of parallel timelines) that end up being contradicted to service the plot, Tenet essentially necessitates a single timeline (though it does hint at the idea that consciousness might not be tied to a single universe) with allowed backward movement from future to past fully affecting every instance of time along the way. This concept does NOT make any physical sense. Effects happen before causes. To interact with inverted objects streaming in the opposite direction of you temporally, you must remember having interacted with something you will interact with later; this behavior is a paradox, but the film insists this physical behavior is valid and forces you to think about time in a completely different manner. Additionally, these physical mechanics also bring into play the possibility of you existing at the same point in time as other versions of yourself both forward and inverted who are “older” than you. The nitty-gritty physics questions such as “How can inverted persons even perceive light?” or “Do inverted persons always perceive sound as coming from the opposite direction as its non-inverted source?” are wisely left unexplored. Within this hypothetical universe, Nolan chooses his spots perfectly with regards to how much “scientific” explanation and complexity is necessary for the film to function cohesively.

Despite it being an atypical time travel film, Tenet brings into play all the issues of time travel since the future can affect the past (e.g. the grandfather paradox). However, Tenet’s operation on a single time axis requires you to accept you might have a lack of information at any given point in time since you do not know when a time-reversal has occurred in the future. The information issue brings into question the existence of “free will” if the past and what you presently perceive as reality can be entirely manipulated by those in the future. Reality itself is not on a firm foundation. The villainous threat in the film is that of existence being eclipsed. If the characters exist at any given point in time, does that not mean they have already succeeded at saving the world? If you do not have free will, what is the point of doing anything? Why should the audience even care about what is happening? One character perfectly sums up how one must view time within the context of the far-reaching temporal effects: “What’s happened happened. Which is an expression of faith in the mechanics of the world. It’s not an excuse to do nothing.” Within that expression lies the film’s brilliance.

Tenet certainly doesn’t lack for grandeur or ambition though it may leave a lot to be desired on the humanity/emotion side of things for some people (you know the people who do not have 2001: A Space Odyssey in their top five films of all time…I am not one of those people). Even still, the biggest hindrance to people enjoying this film is simply the fact that it does not entirely make sense and is thus hard to grasp with conventional temporal thinking. As I said, those individuals would be correct! Nolan plays with a concept that does not make physical sense, but he masterfully instantiates these ideas anyways. He does not see the boundaries of physics as impassable territory. He is one of the few modern mainstream filmmakers who I truly hold as bold and visionary, and the fact that his past commercial success gives him access to budgets north of 200 million dollars allows him to maximize the spectacle in bringing his insane ideas to life. If you like to be fully mentally engaged with a film during and well after your time back in the theater, you will not be disappointed in any way by Tenet.