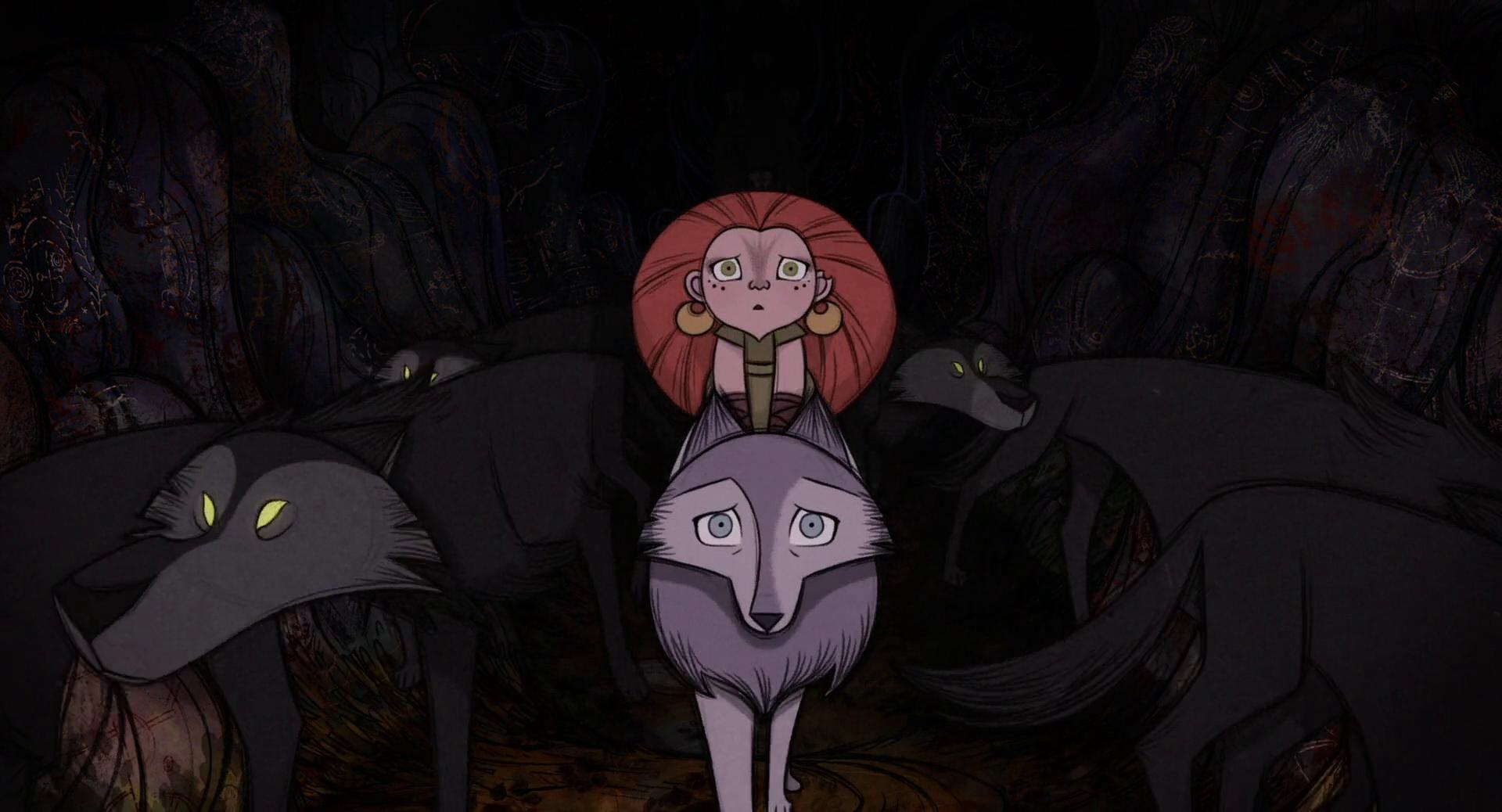 Coincidentally, I had a trip booked to Kilkenny, Ireland for Summer 2020…but…some stuff came up. Anyways, I was afforded transportion to the fantastical vivified 17th-century version of Kilkenny by Wolfwalkers, the latest animated offering from Cartoon Saloon. Forming a thematic trilogy with their two previous works The Secret of Kells and Song of the Sea directed by Tomm Moore, Wolfwalkers tells another story steeped in Irish folklore and brought to life with the studio’s signature hand-drawn 2D animation. Having enjoyed the atmospheres and artistic craftsmanship of the previous films but never deeply enthralled by the characters or plots themselves, I went into Wolfwalkers with the high hope that it would be both the artistic and narrative pinnacle of this Cartoon Saloon collection.

At the story’s outset, we are presented with a ferocious wolfpack that are hostile to the townspeople’s tree-clearing incursions into the wolves’ home forest as more room for farmland must be made in the countryside outside the fortified town of Kilkenny under orders from Lord Protector Oliver Cromwell (Simon McBurney). However, this is no ordinary wolfpack as it is controlled by the thought-to-be-mythical “wolfwalkers”, magical humanoids with a supernatural connection to the wolves. Recently arrived from England with his young daughter Robyn (Honor Kneafsey) and her pet falcon Merlyn, the hunter Bill Goodfellowe (Sean Bean) is dispatched to exterminate the danger. In a disobedient attempt to follow and assist her father on his endeavor, Robyn wanders outside the city walls into the forest only to come face-to-face with a young wolfwalker named Mebh (Eva Whittaker). As it turns out, the wolves are far less feral than the way they are portrayed to the townspeople, and Robyn befriends the amicable and energetic Mehb. Understanding the plight that the pack faces from the humans who seek to remove them from their natural home, Robyn’s outlook changes as she now desires to help her new friends putting her at odds with her father’s tasking and the Lord Protector’s wishes.

Wolfwalkers does a succinct job at setting up the factions of the central conflict and establishing the personalities and motivations of its characters within the first ten minutes of the film. Robyn is a precocious and stubborn but eminently likeable child due to her spirited and innocent nature; she wants nothing more than to please her father with her crossbow precision on the hunt but has little self-awareness of her own stature and the mortal dangers that could await her outside the town’s walls. Goodfellowe is a caring single father who is hyper-aware of the dangers of the wild and the need to respect the established hierarchal order and is very protective of his daughter; the latter parental quality is most likely heightened by the past death of Robyn’s mother to which he alludes. He appears to carefully balance attending to his work and his daughter and you appreciate him as an admirable father. The father-daughter tandem at the core of the movie provides an intelligent, relatable, and likable character for both the parents and the children. A child will positively resonate with ultimately wanting to please and demonstrate the extent of their capabilities to a parent and with wanting to assist friends in need. Parents will positively relate to wanting to protect and raise your child as optimally as possible under stressful circumstances and having the responsibility to make decisions that are best for your child’s well-being despite the child’s potential objections. These scrupulous and genuine characters provide both adults and kids a welcoming entry point to the story.

The outline of the story is straightforward: a child with privileged information must convince a non-understanding adult of a hard-to-believe reality in order prevent harm from occurring to a natural habitat. Though the “child that no one believes” and “civilization versus nature” are common tropes, the storytelling does not dip into cliches and merely uses those themes as jumping-off points for further developments that I will not spoil. Serving as the lone antagonist, the stern Lord Protector, serving as a foil to Goodfellowe, seeks to protect his community and advance his people’s civilization as his duty. However, his lack of genuine care for the people and world around him is plainly evident in his harsh judgments, his willingness to resort to totally destructive methods without understanding the ramifications, and his deluded self-importance as he genuinely believes he is divinely called to tame nature itself. Though he is cartoonishly severe, the Lord Protector has understandable motivations despite his inhumanity and is an imposing and intelligent villainous presence. Though frequently light-hearted and superficially disarming, Wolfwalkers does hold more of an edge than most contemporary children’s film. The stakes of the conflict are dire, and the protagonists are put into actual peril. The main characters’ choices have intense consequences, and, as a result, you are all the more invested in the outcomes of their decision-making. Through attentive plot construction, the intensity actively builds as the story ascends to its climactic clash, the darkest and most exhilarating sequence in the film.

On a purely technical level, the animated brilliance is delightful to behold. The purely hand-drawn effort imbues a distinctly human signature absent in modern 3D computer-animated works. The art style defined by autumnal colors, golden accents, pronounced lines and curves, geometric simplicity, and richly shaded, organically arrayed backdrops is wholly immersive. The large, bright eyes of the main character designs make those characters sympathetic without them having to utter a single word. Not a film you want to blink too much during as every frame is quite literally a spectacular drawing in and of itself. The innovative direction makes the on-screen dynamics stand out as creative character movements and clever environmental interactions abound. Other artistic shot choices such as symmetrical frames, split screens, point-of-view shots, and meaningful changes of aspect ratio keep the visual presentation varied and engrossing. In every facet, Wolfwalkers exudes technical excellence.

Despite the high achievement in Wolfwalkers, I must mention the few critcisms I do have. Though there are a few commendable twists and turns, no adult is going to be incredibly surprised by any of the major plot developments, but this observation is more of a minor note than a meaningful criticism as the primary audience is children and the brilliantly artistic manner in which the story is told is far more important. That being said, there are a few points where mildly deviating from rigid good-and-evil storybook convention could have introduced intriguing wrinkles while still being engaging and graspable by children. Most notably, the Lord Protector is a simple, one-dimensional villainous depiction of Oliver Cromwell, a not-very-well-liked figure from Irish history (to say the least), who could have been easily turned into a multifaceted character with a different treatment, but he still serves his purpose appropriately for a children’s film. While the Irish folk-based score meshes perfectly with the animation and historical backdrop, the song Running with the Wolves by Aurora is placed overtop of a mid-film montage which depicts, of all things, running wolves. It is groan-inducingly on the nose and far too modern compared to the rest of the film’s aesthetics; the song is a distraction from an otherwise beautiful and immersive animated sequence that should have been relegated to the end credits.

Of all the Cartoon Saloon offerings, Wolfwalkers is by far the most engaging experience as its charm and humanity invite personal connection to the story. The story is memorable and exciting as you have a positively growing investment to the protagonists. The visual presentation maximally utilizes the medium of 2D animation and is thoroughly enthralling in all regards. Children and parents alike have something to enjoy in Wolfwalkers, and I highly recommend they sit down together to watch this gem of a movie.