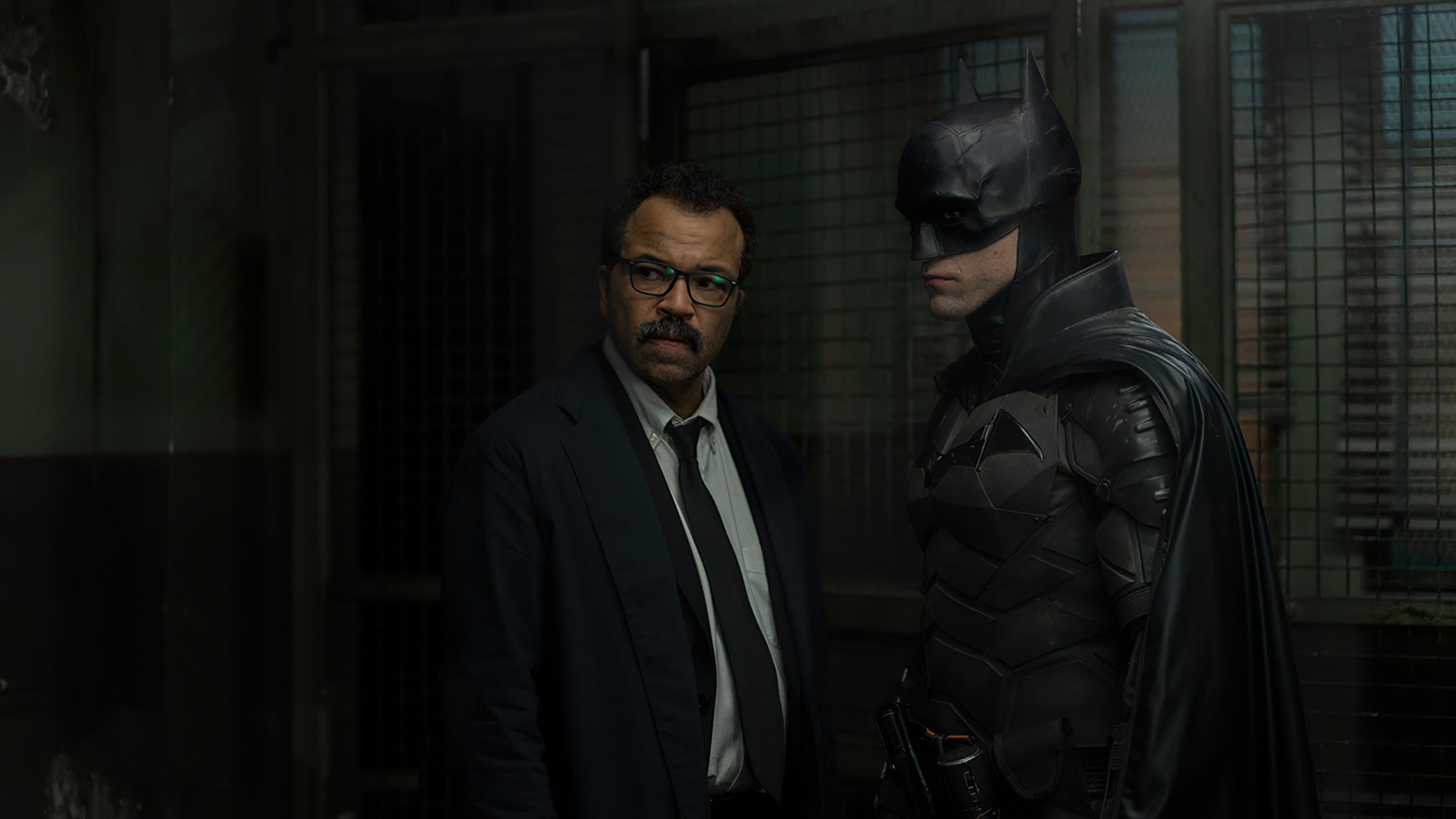 After the most recent Batman incarnation and accompanying clown car of a cinematic universe fell flat, DC film executives decided to allow an alternative take on Batman that makes every effort to put the “Detective” back in Detective Comics. To helm this effort, they appropriately put their trust in writer-director Matt Reeves who has demonstrated he can do uncompromisingly serious takes on conceptually goofy properties as evidenced by his direction of the last two entries in the most recent Planet of the Apes trilogy. As for the Dark Knight himself, Reeves chose Robert Pattinson, a puzzling choice for many but an actor who certainly has the chops to pull the role off. Will this diversionary tactic of a film help DC maintain a semblance of competency?

Within the dingy, crime-ridden Gotham City, a young Batman (Robert Pattinson) intervenes to stymie the nefarious endeavors of thugs who operate under cover of darkness. Refreshingly, of little concern is Bruce Wayne’s backstory before becoming Batman; all you need to know is that he is here to inflict maximum non-lethal damage on criminals at night when the Bat-Signal hits the sky. Corruption runs rampant within the Gotham City Police Department (GCPD) and city government. Attempting to make a political statement as well as communicate with the Batman, an enigmatic villain calling himself the Riddler begins committing livestreamed high-profile murders and leaving accompanying puzzles for Batman to solve. Following the trail of clues, Batman is aided on the ground by the incorruptible Lieutenant Jim Gordon (Jeffrey Wright) and back at the Batcave beneath Wayne Manor by the avuncular family butler Alfred Pennyworth (Andy Serkis). As he infiltrates the criminal underworld, Batman must posture himself against powerful crime boss Carmine Falcone (John Turturro) and his lieutenant Oswald Cobblepot a.k.a. “Penguin” (Colin Farrell) who de facto control much of Gotham from the shadows. Along the way, Batman encounters and allies himself with the mysterious Selena Kyle (Zoë Kravitz) who has her own unclear agenda against Falcone. All the while Batman traverses this labyrinthine path, anxiety pervades the experience as you know the Riddler has meticulously set up the sequence of events and can see to the end of the road.

After the ridiculous brutality of Ben Affleck’s most recent Batman, Reeves dials back the Dark Knight’s fury a bit…but just a bit. Though he restrains himself from taking any lives, Batman makes his identity exceedingly clear in his opening scene when he declares, “I am vengeance.” However, Robert Pattinson’s portrayal of the character outside of the suit just does not mesh with the Batman presented. Explicitly plagued by daddy issues, Bruce Wayne is brooding, pallid, and uninspiring. He fights crime less out of a sense of moral duty but more out of a compulsive desire to assuage his depression and lack of direction, almost as if he is addicted to the adrenaline rush. This Batman seems like an extremely well-funded emo kid working out his childhood trauma through masked vigilante justice. His character arc is fairly simple to ascertain. Initially, Batman’s motivation comes from a purely negative vision of inflicting justice for selfish personal catharsis. Ultimately, having seen the moral fortitude of many people, Bruce takes hold of implementing a positive vision for building up the city outside of himself.

The only issue with attempting to drive home this character development is that Batman does almost nothing of his own volition throughout the movie as he is strung along from point to point by the Riddler. More importantly, the city is objectively worse off by story’s end though Batman stops the Riddler from succeeding at one of his minor objectives. Contrary to Batman, Riddler has a positive vision throughout the plot along with a coherent message and goal that inspires others though his methods are evil and grotesque. Everything he does is in service of exposing the sins that haunt Gotham and ultimately washing them away. Batman and Riddler are a strange foil of one another: Batman is performing moral acts for less than virtuous reasons while the Riddler is committing immoral acts towards creating a more virtuous society. The Riddler even admits he expects the Batman to be on board with what he is doing. That is why I was disappointed with the decision to play up his insanity in schizophrenic fashion; the Riddler is clearly lucid but morally aberrant. Depicting him more like the Unabomber would have made more sense especially with how dark the atmosphere of the film already is. Ultimately, the Riddler is mostly successful as far as comic book villains go, and Batman is not heroic in any meaningful way, making the positive outlook at the film’s terminus unearned and nonsensical. The film’s incoherent messaging is due to a fundamental mismatch between depiction and the insisted intent.

Even if I could look past this movie fumbling around with presenting an inspiring main character, I certainly cannot look past the runtime which is a hair under three hours. The girth of this films is a consequence of too many characters as well as trying to combine two different movies: a detective crime thriller and a moderately complex mobster flick. The film is at its strongest when it focuses on Batman as a detective and vigilante crime fighter. It is at its weakest when it gets lost in the subplots of the nefarious underbelly of organized crime in Gotham and brings in Catwoman. Once she enters the frame, the story then has to deal with her daddy issues on top of Batman’s daddy issues and it is an unnecessary complication in an overly convoluted plot. Additionally, despite brief bits of levity, the film is painfully serious and overbearing for the majority of the runtime. In the last act, it felt like the movie was simply refusing to end at several points. To top it off, there is some implicit political messaging that I do not appreciate but is not terribly distracting.

Despite much of the movie not coalescing, all the trappings are superb. The noir atmosphere hearkens back to 1940s and 1950s crime thrillers such as Hitchcock’s Dial M for Murder, though the modern crime scene procedural sequences reminded me of a tamer version of David Fincher’s Se7en. Low-lighting with an orange-ish hue works well to characterize the gloomy presentation of the city. The various urban British settings used to create Gotham City immerse you into the film’s universe which feels distinct from all the previous films. The action cinematography is creative and engaging, hitting its peak midway through the film with a riveting chase sequence involving the Batmobile. Michael Giacchino’s score is particularly innervating; it is appropriately reserved and foreboding though massive and crescendoing when it needs to be. Stylistically, I hope DC moves the look and feel of their films more in this direction if they are going to be dark and moody.

Though my criticisms strike at the core of the movie, the majority of people will still probably find much of the superficial experience enjoyable. If you are a fan of Batman, you have already seen this movie so I will not address you. If you are into more serious crime and action thrillers and enjoy detective stories, you will probably enjoy this movie. Aesthetically, The Batman gives us one of the coolest looking and functioning Batman universes…now give us a cool Batman. While The Batman is able to salvage DC’s competency, it is certainly not a pinnacle of mainstream cinematic achievement.